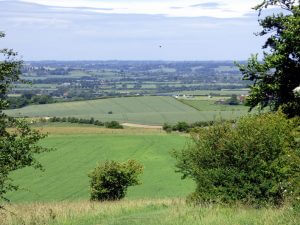 An Area of Outstanding Natural Beauty (AONB) is an area of countryside in England, Wales (Ardaloedd o Harddwch Naturiol Eithriadol) or Northern Ireland which has been designated for conservation due to its significant landscape value. Areas are designated in recognition of their national importance, by the relevant public body: Natural England, Natural Resources Wales, or the Northern Ireland Environment Agency. In place of AONB, Scotland uses the similar national scenic area designation. Areas of Outstanding Natural Beauty enjoy levels of protection from development similar to those of UK national parks, but unlike with national parks the responsible bodies do not have their own planning powers.

You will need to contact your local authority to establish this. Some will have online maps to enable you to look up the AONB areas. You can look the locations of AONBs via the DEFRA MAGiC Map. Look under Designations/Land Designations/Statutory within the table of contents.

Some changes of use are allowed in areas of outstanding natural beauty (AONB). Check out our useful reference table to see what is possible where. Click here.

These include Class A – Restaurant or Takeaway to Shop, Financial or Professional; Class G – Shops or Financial establishments to Mixed Use; Class L – small HMOs to dwellinghouses and vice versa; Class O – Offices to Residential Conversion; Class PA – premises in light industrial use to residential; Class R – agriculture building conversion to flexible commercial use