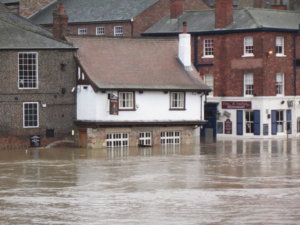 You may have discovered this page when trying to answer the question ‘Which flood zone is my property in?’.  We will aim to help you find out. Plus we will explain why they even exist.

We are all aware that flooding exists. This could be from the sea, rivers, reservoirs or from surface water.  The Environment Agency created the various flood zones as a method to aid planning.

Flood zones are divided into four – Flood Zones 1, 2 and 3 – yes, that is only three! That is because the Environment Agency only maps three, but local authorities split Zone 3 into 3a and 3b.

You can establish which flood zone you are in by visiting this Environment Agency website.

Further Guidance can be found on the Government pages here.

Areas deemed to be in flood zone 1 have been shown to be at less than 0.1% chance of flooding in any year. Land having a less than 1 in 1,000 annual probability of river or sea flooding. (Shown as ‘clear’ on the Flood Map – all land outside Zones 2 and 3)

There are very few restrictions in terms of flood risk to development on flood zone 1 areas, the exception is for development over 1 hectare in size which must have a flood risk assessment undertaken as part of a planning application and areas deemed to be at high risk of flooding from rainfall known as Critical Drainage Areas.

Flood zone 2 development needs to submit a flood risk assessment as part of its planning application which shows the risk of flooding to the site.

Flood zone 3 development needs to submit a flood risk assessment as part of its planning application which determines if the site is classified as flood zone 3a or 3b as well as reviewing flood risk on the site and proposing suitable mitigation.

This zone comprises land where water has to flow or be stored in times of flood. Local planning authorities should identify in their Strategic Flood Risk Assessments areas of functional floodplain and its boundaries accordingly, in agreement with the Environment Agency. (Not separately distinguished from Zone 3a on the Flood Map)

What can be built and where?

These can be constructed in Zones 1 and 2. In Zones 3a and 3b an Exception test is required. In Flood Zone 3a essential infrastructure should be designed and constructed to remain operational and safe in times of flood.

These can be constructed in Zone 1 but in Zone 2 an exception test is required. They cannot be built in Zone 3a or 3b.

More vulnerable (including houses and flats)

These can be constructed in Zones 1 and 2 but in Zone 3a an exception test is required. They cannot be built in Zone 3b.

These can be constructed in Zone 1, 2 and 3a. They cannot be built in Zone 3b.

These can be constructed in Zone 1, 2 and 3a. In Zone 3b water-compatible uses, should be designed and constructed to: