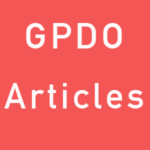 The General Permitted Development Order (GPDO) is divided into ten Articles. Four of these Articles are then expanded further. These expanded areas are called Schedules. These are then in turn split into a number of Parts. Finally these Parts are divided into Classes within Schedule 2. This is Article 3.

Where we have additional pages and tables to assist you they are included below. Of course they are not part of the various GPDO Articles, Schedules or Classes – but are included to make life easier for you. If we can improve this section in any way – please get in touch.

Below is a full list of all articles within the GPDO:-

Article 3 is the section that deals with the various changes of use and other permitted development rights within the GPDO. This is further expanded in Schedule 2 Parts 1, 2, 3, 4 to 20

(1) Subject to the provisions of this Order and regulations 75 to 78 of the Conservation of Habitats and Species Regulations 2017 (general development orders), planning permission is hereby granted for the classes of development described as permitted development in Schedule 2.

(2) Any permission granted by paragraph (1) is subject to any relevant exception, limitation or condition specified in Schedule 2.

(4) Nothing in this Order permits development contrary to any condition imposed by any planning permission granted or deemed to be granted under Part 3 of the Act otherwise than by this Order.

(6) The permission granted by Schedule 2 does not, except in relation to development permitted by Classes A, B, D and E of Part 9 and Class A of Part 18 of that Schedule, authorise any development which requires or involves the formation, laying out or material widening of a means of access to an existing highway which is a trunk road or classified road, or creates an obstruction to the view of persons using any highway used by vehicular traffic, so as to be likely to cause danger to such persons.

(7) Any development falling within Class A of Part 18 of Schedule 2 authorised by an Act or order subject to the grant of any consent or approval is not to be treated for the purposes of this Order as authorised unless and until that consent or approval is obtained, except where the Act was passed or the order made after 1st July 1948 and it contains provision to the contrary.

(9) Except as provided in Classes B and C of Part 11, Schedule 2 does not permit any development which requires or involves the demolition of a building, but in this paragraph “building” does not include part of a building.

(9A) Schedule 2 does not grant permission for, or authorise any development of, any new dwellinghouse—
(a) where the gross internal floor area is less than 37 square metres in size; or
(b) that does not comply with the nationally described space standard issued by the Department for Communities and Local Government on 27th March 2015(a).

(9B) The reference in paragraph (9A) to the nationally described space standard is to that standard read together with the notes dated 19th May 2016 which apply to it.

(13) Where a person uses electronic communications for making any application required to be made under any of Part of Schedule 2, that person is taken to have agreed—
(a) to the use of electronic communications for all purposes relating to that person’s application which are capable of being effected using such communications;
(b) that the address for the purpose of such communications is the address incorporated into, or otherwise logically associated with, that person’s application, and
(c) that the deemed agreement under this paragraph subsists until that person gives notice in writing revoking the agreement (and such revocation is final and takes effect on a date specified by the person but not less than 7 days after the date on which the notice is given).